As we have recently posted our 50th beer haiku, it is time to reflect why we compose poetry in this short Japanese lyrical verse form. To be brief, like haiku, here are some key points of reflection.

1.     We compose beer haiku because this abbreviated form of poetry (unlike this sentence) offers us the opportunity to record tasting notes in a type of “beer reviewers shorthand” that is also a recognizable lyrical verse form.

2.     There’s too much to read on the internet via twitter, blogs, facebook and other forms of social media. Our readers have limited time. Haiku are quick reads.

3.     We have limited time too. Composing haiku is difficult. It takes thinking time, arguing time, it fritters away our limited beer drinking time; we don’t havetime to craft several paragraphs with flowing transitions. We just don’t…

5.     What could be a more appropriate location to develop our skills in a Japanese lyric beer poetry form than in a place called Hashigo Zake Cult Beer bar?

6.     When (or rather…if) we master the ancient art of beer haiku writing, the Jesuit has said he will teach us the lost art of composing beer “villanelles”…I’ll have to look that word up.

Since Spring is – theoretically at least – in the air, it’s probably a good time to start thinking about warm weather beers. Happily, the new release at Hashigo Zake Cult beer bar this week was a toothsome golden ale from Dutch favourites De Molen.

Cleaner than it looks

It’s the kind of beer you drink when: watching Malice mow his lawn, sitting beside the Bosphorus watching the locals

Last week and four days on from Beervana 2013, most of the dashing young Thirsty Boys had recovered sufficiently that the weekly new release at Hashigo Zake Cult Beer was its usual enticing prospect.

Not so well upholstered as

It’s the kind of beer you drink when:  as an interesting curiosity.

Text and photographs by The Lady Pie Maker

I must admit I did not go to Beervana prepared to write this blog. I had a number of ideas for a ‘take’ on the annual craft beer event, it being my first, but it didn’t occur to me that I might end up writing a Beervana Style File. While the Thirsties have successfully expanded my once narrow-minded view of beer over the last year, I haven’t really come to associate beer drinkers with ‘style’ much beyond t-shirts and beards, two subjects keenly documented by Thirstyboy Malice. As such, Beervana was something of a sartorial surprise, with the attendees and their choice of dress proving to be just as idiosyncratic and enjoyable as the beers.

Here is my unexpected Beervana Style File of 2013

Pamela, who  looked like she could have walked out of Ari Seth Cohen’s blog Advanced Style, was my first subject – such charming elegance is rarely seen in Wellington’s smartest haunts let alone expected at a beer festival at 11.30am in the morning!  A teetotaler, Pamela was visiting Wellington to spend sometime with her daughter, who was determined to attend Beervana.

Ryan accessorised his no-nonsense Swanndri – a true New Zealand design classic which celebrates its 100th anniversary this year – with some nifty technology, a mantrol ear piece and mic in order to carry out his important Beervana task – controlling the beer.  Ryan developed his unique look to ensure that he could be quickly found in a crowd. 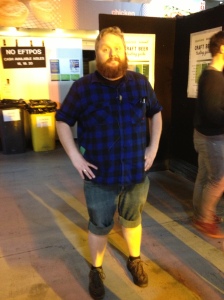 Checks, a pattern long associated with real men’s work wear, proved popular among a wide range of Beervana gents despite the fact that most had the day off. 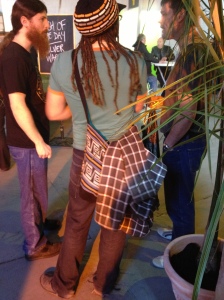 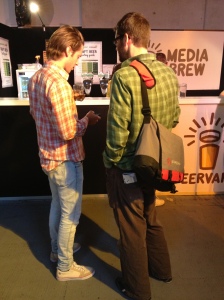 The most recognisable checked shirt of the day, however, belonged to hardworking Pete from the Garage Project, who is photographed firing up a mighty glass of Cockswain’s Courage Porter.

Looking more like a landed gent than a working man, Stephen look set for a Sherlock Holmes style adventure in his tweed and deerstalker hat.

Indeed, Beervana seemed to operate like an informal Fashion in the Field for men when it came to hats, with everything from beanies to pork pies on display, although thankfully free of fascinators.

No doubt a challenge to the eye after too many beersies, Jeff stylishly mixed stripes and hounds-tooth with a checked Dough Boy cap. 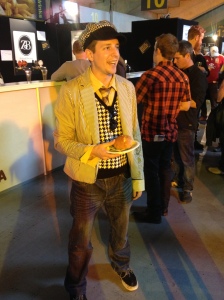 James and Ryan respectively opted for a military style beret and Leonard Cohen fedora, with some peace-loving beads thrown in for good measure.

Meanwhile, West Coast supporter Duncan, made a turban from his own dreads 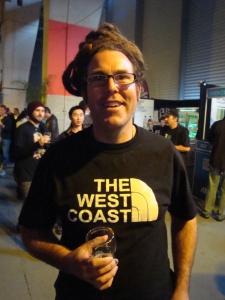 and Hannah from the Garage Project tidied her locks up into in a 1940s style do-rag. 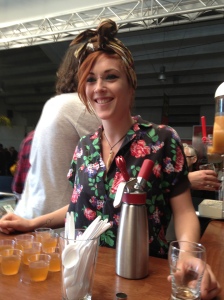 Other Beervana seekers used colour to make a statement. Vicki from Crafty Beers rocked purple from head to toe, while Misty from Three Boys stayed on brand in khaki.

Red was the colour of choice for fellow beer blogger Hop Head Pete, whose own blog reveals his penchant for snappy bow ties and waistcoats,

and for this crafty lady, who sported a button encrusted capelet and crochet appliqued bag for a crafty beer day.

And then there were the guys, like Nick, who opted for understated, classic cool 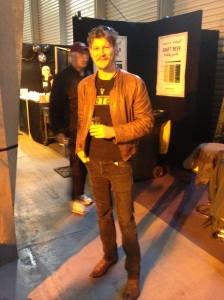 By now you may have picked up a bit of favouritism, and you’d be right. The Garage Project booth was my personal favourite on both the individual flair and inventive beer fronts, although their back-to-front booth troubled some of the more pedantic Thirsties.

And then there were the shoes… 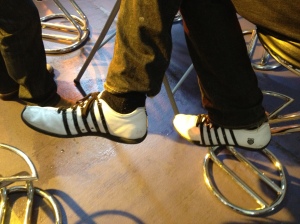 But by then my battery began to run low, the girl with the stars and stripes sneakers kept evading my camera, and the call of the beer won the day. Next year I’ll be more prepared.

It’s Beervana time again, and this festival has so much going on that we will post three or four review type blogs over the coming week. Like last year, we thought we’d give you an insight into the culture of beer geeks at Beervana through their T-shirts.

This year in the first session of day one, there were a few familiar and old T-shirt designs out there, but many more new or re-imagined ones, worn by many people. I guess this says something about the vitality of the craft brewing scene but also the people who attend Beervana…what they like, where they come from, where they’ve been and what they drink. Marketing beer through products like T-shirts appears to be a popular strategy. It was interesting to note the brewers/products that were most visible and those that were not as visible as you might expect. Several Australian and international breweries were represented on T-shirts in the crowd. I photographed three members of a visiting Canberra based beer club, each with a different shirt and a few Englishmen too. A highlight for me was the beer and pop culture mashups. Witty quotes and wise words of beer wisdom were in abundance.  There was even a T-shirt stall this year…a bloody big one, but I only photographed T-shirts on punters. Many thanks to all the T-shirt wearers for your cooperation. Here is a mega- selection of the T-shirts at Beervana via slide show…comment about your favourites. To follow us by e-mail notification please click follow at the bottom right hand corner of the screen.

You may also like the T- shirts of beervana 2012

or check out the BEERVANA 2013 STYLE FILE