So I was asked to write a “review” of the Yeastie Boy’s Big Mouth 5th birthday zine edited By Stu McKinlay’s talented partner Fritha.  I was inspired by the combination of her drawings, hilarious photos, and even funnier cut n’ paste collage aesthetic.  The content is a super friends collaboration with heaps of local, off beat artists and writers contributing.  In this spirit of deconstruction, and reconstruction I decided to go for a “remix” version. With the assistance of some home-brew, a Beastie Boy soundtrack and  the lovely Hayley Adams we sliced up the  images and text onto a chunk of cardboard. It’s free form and strange just the way it should be.

ZINE: A zine (/ˈziːn/ zeen; an abbreviation of fanzine, or magazine) is most commonly a small circulation self-published work of original or appropriated texts and images usually reproduced via photocopier. (Wikipedia.org)

If Television shows were beers…

Breaking Bad, the stress inducing American crime drama series, would have to be some huge Imperial stout that lays you out among the daisies and offers you no redemption. None. Try the Liberty ‘Never Go Back’ Imperial Oat Stout 10.6%. “I can’t remember that beer, so it’s probably a good example…”GBM

Star Trek (the original series) would be a beer that is unique, more than a little crazy and possibly with the aroma of horse sweat. It has to be Orval. “What do you mean by horse sweat?” Malice 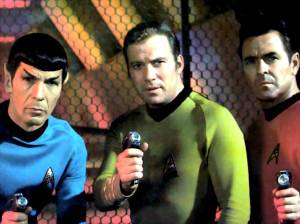 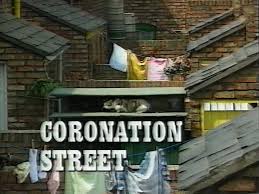 The Thick of It , the British comedy series set in government would be an angry Scottish beer like Orkney Brewery’s Skull splitter… yeah, that’s right. 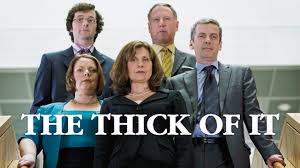 Downton Abbey, the English period drama series, would be a beer that is light and frothy, but aspiring to a depth and complexity it hasn’t earnt like the MOA  range (caveat: “we like their Imperial stout…” Jesuit)

Danger Mouse the animated cartoon series, would be a beer that is fruity and surprisingly adult like F. Boon Kriek

Campbell Live the New Zealand current affairs show, would be a beer you don’t finish like…(finish this sentence)

10 pros and 10 cons of the canning revolution…pssssht-ah!

The arguments in favour of canned beer have been exhaustively canvassed (pun intended). However, on Tuesday, in the quiet lull before the new release beer was poured, a few of the Thirstyboys tapped into their collective thoughts and decided to brew over some pro’s and con’s of the phenomena of craft beer in cans.

The Jesuit claims the most experience in this area having enjoyed all the canned beers offered by Garage Project…he’s obviously a very Thirstyboy, and as the only beer drinker in his household, the serving size and cost are probably convenient and economical.

I’ve got to say that for the most part, at least the cans I‘ve seen look good. GreasyLightbulb thought they would look better if they were made in the shape of little metal kegs. He’s a closet marketer this guy…he also wants to know, “Can you condition in a can?” Whatever your experience, or your preference, here is a light-hearted listing of what’s good and what’s not so good about those crafty tinnies. PROS:

It was an unusually crisp early spring afternoon when the Thirsties assembled at Hashigo Zake Cult Beer Bar for a spirited discussion of comparative philology, predicated on how best to render  the umlaut in English (see comments on last week’s haiku for further non-elucidation). This week’s new release from New Zealand was another collaboration, this time between Hamilton’s 666 and Taupo’s Lakeman featuring a blend of Chinook and Nelson Sauvin hops.

Nothing devilish about that

Food match: bacon buttie, with or without lettuce and avocado; Gruyere

It’s the kind of beer you drink when: fantasising about bacon butties.

Text and Photographs: Greasylightbulb and Malice

Since the formation of the Thirstyboys, Malice has been getting grief from them about there being no craft beer in the Pacific. What annoys him is that these guys (a couple of whom fail to drink across the craft beer spectrum) forget that New Zealand is an archipelago of islands in the Pacific (like Japan and Hawaii) and there is an annual event called the Great Pacific Beer Expo held in Wellington, New Zealand every October. Given the Pacific’s horizons are much broader than the Thirstyboys’ imagination will ever be, we thought we might as well have a go at highlighting for them some of its many craft beer dimensions.

This historically significant beer tasting was organised for the Pacific History Association Conference held in Wellington, December 2012. About ten people showed up to the tasting. There were Pacific historians , indigenous and non indigenous Pacific Island dwellers of several shades and beard types, a few Frenchmen and women, and even an anthropologist in training. The evening was hosted by award winning Beer scribe Phil Cook  who had long seen the possibilities of a Pacific themed beer tasting.

So here is the schedule of beers we tried, each with a short historical note and our vote for best beer at the end. Our grateful thanks to Adrian and Teresia of the Pacific History Association for helping make this happen, GLB for his note taking…and of course to Phil Cook for bringing the selection of beers together on one table. (click to enlarge images)

Named after the national icon flower of Tahiti, this beer was launched in 1995 at the annual Tiurai festival currently known as Heiva i Tahiti.  It’s a light golden lager that comes in at 5%.  “Smelt bready, reasonable body, no faults”. Shortly after establishing the beer it was marketed and sold in China, and in1962, according to the website, they gave the lady on the bottle bigger breasts.

Making beer since 1862! Probably quite early in Pacific beer making history, but not the earliest (see below). So this is their 150th anniversary. It has defined a style in Australia, Australian Pale Ale, now everyone makes one.

Bottle conditioned, the website tells you how to mix up the sediment if you want in different ways for different beers. This is a gimmick and Phil said when he met one of the Cooper family that they poured it clean without the sediment.

Someone started talking about Vipala? Bark as a bitter medicine, didn’t sound like a compliment

Nice, could have been served colder.

This a Rimu/Manuka beer interpreted from a recipe used on one of English explorer Captain Cook’s voyages to New Zealand in the late 1700s. Named after the pig that was named after Captain Cook, so “piling one pun on top of another” – Phil.

Brewed in Golden Bay by Mussel Inn since 1995. Listed as 4% but bottle said 5%. Possibly because this is a version made in invercargill breweries. Complicated? The beer is actually also brewed overseas in Belgium by de Proefbrouwerij, though it’s 5.7% there and the bottles look very different. It’s also  brewed in the United States, where it’s cranked up to over 6%. There is an invitation for anyone to brew it in fact… http://www.openbreweries.com/licenses. Allegedly, they keep sending it to labs to get scientific proof of it’s health benefits, antioxidants etc, but nothing had been proven. 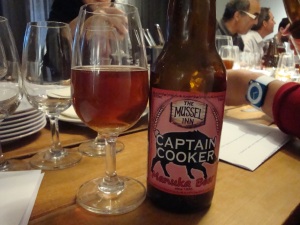 The kereru is the wood pigeon that is native to New Zealand, and the kumara was brought to New Zealand by the first settlers from the Pacific. Made by an American from the movie industry in a brewery so small you’d struggle to bath in it see here http://kererubrewing.co.nz/ . Labels are made by his wife. Inspired by American pumpkin ales. Tastes great with nuts, Phil got a brief lesson on the difference between kumara being indiginized not native.

Probably the first kava coconut beer made in New Zealand ever. From the Kava supplied by Malice & Teresia and the brewing skills of Pete at Garage Project. (You should read his account of brewing the beer. ) Some instant expressions of delight or horror on tasting it “some of the interesting qualities of the kava have come through” – Teresia. It’s Fijian Kava. We learned about the washdown after a kava session and that kava tastes cause sensitising, the opposite of habituating, so that the more you drink it the more you are able to detect it.

It tasted a lot more balanced and integrated than at the Pacific Beer Expo, Phi discussed how a lot of beers are sold and consumed a bit earlier than they should be ideally.

Kurofune – named after the American black ships (powered by coal and black in colour) that rocked up in Yokusuka, Japan for a bit of gunboat diplomacy in 1853. This event in the islands of the Pacific rim led to the establishment of trade and diplomatic relations between Japan and the United States. Phil told us how the area now actually embraces the label and imagery which isn’t something you’d imagine being mirrored in many other parts of the world…

This award winning brewery has been going since 2005. Aside from the curiosity the big novelty here was the cans! Tom suggested if you actually made cans look just like minikegs then they’d be more accepted. They stack well, cool quicker, stop light defects, the librarian at the other end of the table pointed out it would be harder to hurt someone with a can than a bottle, Librarians hey.

This can label departed slightly from their usual content and wasn’t well received by the learned team. Very slightly sickly tasting beer if you are not one for coconut, less of a beer for the beach and more of a beer for the evening. it’s definitely worth checking out, Phil’s written about it here . 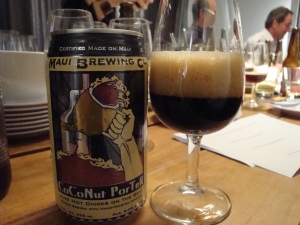 The vote for the tasting:

4 years in the making and a labour of love for Malice, Captain Cooker and kava coconut came equal first in the vote, 2 votes per person system. Maui came 3rd. Mahalo nui…! 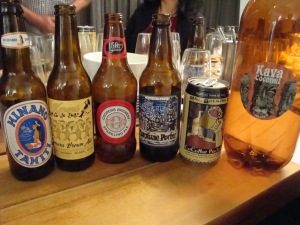